On May 25, 1961, President John F. Kennedy set an unheard of goal for America when before a joint session of the United States Congress he declared, “I believe this nation should commit itself to achieve the goal before the decade is out of landing a man on the moon and returning him safely to Earth.” 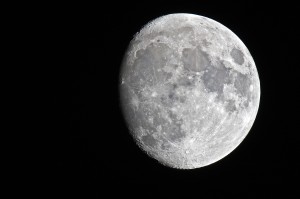 Eight years later, Apollo 11 stood ready to land the first man on the moon. So anticipated was man’s first trip to the moon that no hotel rooms were available within 75 miles of the launch site. Three hundred thousand automobiles and motor homes were parked nose-to-rear three miles from the launch site. An estimated one million spectators came to watch the lift off. A global television audience of one billion people gathered around their sets to watch, for better or worse, the greatest adventure in the history of mankind.

Privately, many inside the Apollo program rated the chances of success for the mission at 50/50. The President had already prepared a press release for the nation in the case of failure.

On the launch pad sat waiting a Saturn S4B rocket. She climbed 36 stories high and weighed 6,000,500 pounds. All but 500 pounds of that weight were liquid hydrogen, oxygen, and high-grade kerosene. The liquid hydrogen was pumped into the huge jugs of the rocket at 297° below zero. The magnificent white and silver rocket creaked and moaned as she waited to begin her journey while great chunks of frost formed on her walls and occasionally fell to the ground.

Perched on top of the rocket were three men: Michael Collins, Buzz Aldrin, and Neil Armstrong.

At T minus 8.9 seconds, the ignition sequence begins. Four small flames light inside the rocket. A sudden flash of orange smoke blasts out of the base of the rocket. At T minus 5.3 seconds, the main fuel valves open, and a torrent of liquid oxygen burst through at the rate of three tons per second. Enormous flames roar from along the concrete channels as an underground river of flames pours into the air upward and outward, engulfing the rocket. At T minus zero, the engines have developed six and one-half million pounds of thrust. The rocket levitates in place on the launch pad. The first deafening sounds come through the ground as the earth starts to move. The S4B builds to seven and one-half million pounds of thrust. The crackling sound of 1,000 machine guns firing at once fills the air. Nine holding arms weighing 10 to 30 tons a piece retrain the rocket. The earth trembles. The sounds waves create a physical force so great it equals the volcanic eruption of Krakatoa in 1883. The holding arms release and the Saturn S4B climbs majestically to begin her 218,000-mile journey to the moon.

Apollo 11 achieves orbit around the moon on July 20, 1969. Fifty feet over the surface of the moon, the Lunar Module Eagle separates from the command module. No one knows what the next 20 minutes will bring, whether great triumph or great tragedy.

Back on Earth, a decision has to be made. Flight Director Gene Kranz tells the eight flight controllers he is going around the horn for a “Go” or “No go” to land on the moon. All are “Go.”

From 45,000 feet to 2,000 feet above the moon, Eagle is to be controlled by a computer. The computer takes control and rolls the Eagle over. Lying on their backs and looking back at Earth, the astronauts begin their descent. The rockets burn behind them, slowing their descent at 600 miles per hour. Six minutes into their descent an alarm buzzer sounds. The landmark Maskelyn W is two seconds late on the horizon. The Eagle is two miles off course.

Buzz Aldrin calls out, “Program alarm 1202!” The computer system is being overloaded and could fail. All eyes turn to 26-year-old flight controller Steven Bales. Aldrin repeats, “1202!” No response from Steven Bales who must make the decision for “Go” or “No go” to land on the moon. Impatiently, Aldrin calls out, “Give us a reading on the 1202 alarm!” The world is waiting on Steven Bales. It takes him 19 seconds to make this life-or-death decision. “Still a go!” he shouts.

Eight minutes into descent, flight controller Bob Carlton tells Kranz, “Descent to fuel.” This is code to signal the astronauts they are burning too much fuel.

Nine minutes into descent, Aldrin calls out, “We’ve got an alarm: 1201!” The computer is being overloaded again, but Steven Bales overrides the computer and shouts, “Still a go!”

Ten minutes into the descent, 2,000 feet above the moon, Neil Armstrong takes control of the Lunar Module Eagle. He drifts over the surface of the moon, burning precious fuel. Carlton tells Armstrong, “60 seconds.” Armstrong must land Eagle in 60 seconds, or the computers will automatically abort the landing and fire the ascent rockets. Carlton whispers to Kranz, “30 seconds.” With an estimated 11 seconds of fuel remaining, Armstrong lands at Tranquility Base.

One day later, Eagle lifts off the surface of the moon, and on July 24, 1969 all three men return safely to Earth.

A year after his return from the moon, Neil Armstrong was asked what impact, if any, the Apollo mission had on mankind. Armstrong expressed disappointment that mankind had missed the real message of Apollo, saying, “I believe that the message of Apollo 11 was that in the spirit of Apollo, a free and open spirit, you can attack a very difficult goal and achieve it, if you can all agree and work together to achieve that goal.”

Anything is possible if you work together as a team.

Ecclesiastes 4:9 “Two people are better off the one, for they can help each other succeed.”