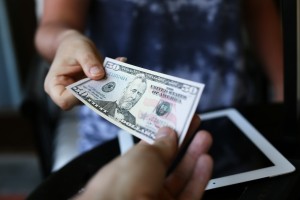 Chelsa Welsh, an Applebee’s waitress, posted the above note on Reddit.com, and it created a firestorm of controversy. The pastor of the Truth in the Word Deliverance Church in St. Louis later apologized for leaving the note and bringing embarrassment to her church. But she also demanded that everyone at the restaurant be fired for violating her privacy. Chelsa Welsh was fired. Columnist Haywood Bynum of the Topeka News supported the pastor writing, “We live in the land of the lazy. Welfare queens, elderly running up Medicaid, and waitresses are destroying our economy…Why should a lazy kid get a big fat tip for bringing me food when the Creator of all things only gets 10%?”

According to the Chronicle of Philanthropy, less than 3% of Christians tithe at 10%—and 17% give 0%. Jack Shelby, former vice president at PayPal, went around the country tipping from $500 to $5,000 on restaurant and bar tabs with the note “Tips for Jesus.” Strangely, Mr. Shelby claimed he had no passion for Jesus and did it “just because.”

My son Trevor gave me a book for Christmas several years ago, called Nickel and Dimed by Barbara Ehrenreich. She was a journalist who went to Key West, FL to write about working on the bottom rung of the workforce ladder. As a waitress, she was overworked, abused by customers, worked seven days a week, and had to take on two jobs to survive and avoid sleeping in her car. Of her experience, Ms. Ehrenreich said, “I’ve been told if you work hard you’ll get ahead…no one ever said you could work hard—harder than you ever thought possible—and you’ll find yourself sinking ever deeper into poverty and debt.”

An Applebee’s waitress makes approximately $3.50 an hour, or about $9.00 an hour with tips, after sharing with the hosts and bussers. The 20-year-old Ms. Welch received a lot of social media support and offers to send her money. She responded, “As a broke kid trying to get into college, it’s certainly appealing, but I would rather people hold onto their money for the next time they eat out. Harsh notes, bad tips, and getting fired because customers are unhappy happens to waitresses all the time, everywhere.”

I’ve decided to be a cheerful giver and be more generous when I tip, but I will also make an effort to be friendly and respectful to those who are serving me. If I act more like Jesus treating people with respect, others might come to know God through Jesus because of me—and have hope.