#44 – Lexus vs. LexisNexis Round 4: A No-Name Luxury Division

On Wednesday, April 20, 1988, a bitter courtroom battle between LexisNexis and its chief competitor, Westlaw, in a Minneapolis court came to an end. It was a lawsuit between the two leading legal online research firms over copyrights issues. It had not gone well for the LexisNexis legal team, and they settled the case. It was our hope that now the LexisNexis attorneys would have time to turn their attention to us. We hoped to meet the next Monday to begin resolving the naming issue with a win-win solution.

We never got the chance. Two days later, LexisNexis filed a lawsuit in the United States District Court for the Southern Division of New York under New York’s anti-dilution statute. The statute protects companies from injury against the dilution of the distinctive quality of a trademark name.

This made no sense! There could be no confusion with consumers as to the services of a luxury automobile company versus online legal research. Lexus was a made-up word designed to infer luxury; it could not be found in any dictionary. Lexis was a recognized English word in at least 60 general dictionaries. Its root meaning in Latin and Greek was “vocabulary of language” and had never changed. 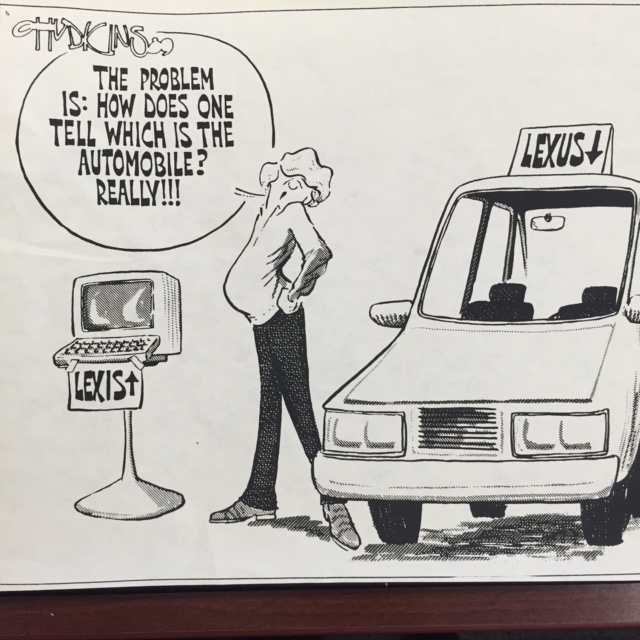 Even more frustrating was that numerous companies had incorporated the same Lexis name to identify their business and products that were competing in the internet services area. Yet, LexisNexis had not filed suits against any of them.

We were now in a very real time crunch. It was only 464 days until the Lexus launch date, and we had no name. A federal judge would need to hear this case and make a ruling by December 1988 because we were planning to introduce the F1 in just eight months at the Detroit Auto Show in January of 1989.

When a reporter asked a representative from LexisNexis why they were doing this, he casually replied that they just didn’t want us to use the name Lexus.

Depositions were taken during the summer and a court date set for early November of 1988 in New York. I was nervous. We shouldn’t lose, but you never know—we could.

“Just because you’ve seen something, don’t be in a hurry to go to court. For what will you do in the end if your neighbor deals you a shameful defeat?” Proverbs 25:8 (NLT)

Time did not stop for the LexisNexis lawsuit. The September launch date for Lexus remained fixed. There were a thousand moving parts in Japan and the U.S. that needed to all come together in 18 months. The Lexus Japan Staff Coordinator had an idea that was used in Japan that he thought could help eliminate confusion and improve teamwork in the U.S.


(To be continued in “The Obeya Room”)