Ready or not, it was time to find out if all the long hours of planning, personal and professional sacrifices, and gut-wrenching decisions would pay off.

All across the country we were holding two-day training “boot camps” for all dealership personnel. These training camps consisted of test-driving the cars, lectures, quizzes, and role-playing. Guest speakers were Vince Lombardi, Jr., former Green Bay Packer and best-selling author Jerry Kramer, and motivational speaker Gordon Graham. All the speakers told the Lexus dealership personnel, “If you think you can’t, you won’t. If you think you can, you will. We can…we will.”

Business Week magazine quoted me telling the sales people something I don’t remember saying, “The most important single factor in the Lexus Division is what is in the hearts and minds of the people who make up this organization.” Business Week deemed the training more like “revival meetings.”

The early reports back from the dealers were encouraging. The pre-sell activity had developed more than 50,000 names of individuals who expressed interest in learning more about Lexus. These names were all given to the dealers.

Peter Brown, General Manager of the Lexus dealership in Cherry Hill, New Jersey told USA Today, “Everyone who drives the car comes back with their adrenaline pumping.”

The Lexus dealer in Tampa Bay, Florida, Ron Salhany, reported he had already sold eight of the first 14 LS400s he had received and told our field office in Atlanta,  “Send more LS400s. We are going to sell out.”

Our dealer in Milwaukee, Wisconsin, Jack Safro, reported customers showing up at his dealership at 7:30 in the morning waiting to see the LS400.

Yuki Togo, Bob McCurry, and the senior executives in Japan were intently watching the sales numbers. Every few hours I would check my laptop to see how many sales had been reported. It was agonizing, like watching water boil. 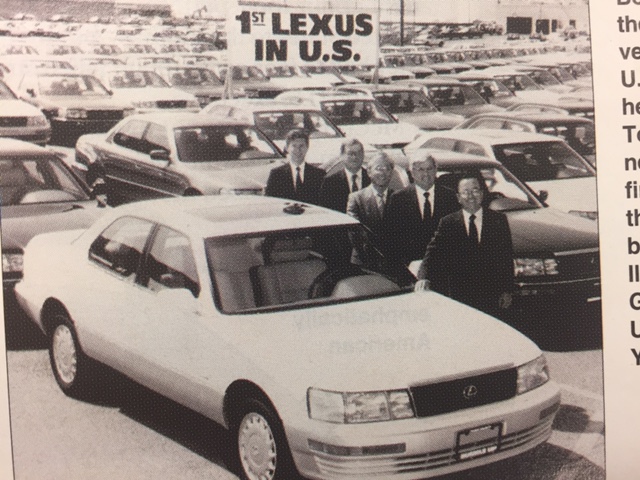 Finally, the month was over. The sales results for our first month in business were both good news and bad news. We sold 4,554 units in September, missing our total sales objective of 5,000. The ES250 was off to a poor start, selling only 1,115 units, but the LS400 was off to a good start, selling 3,439. We were pleased with the LS400 sales but uneasy with ES250 results. The rest of the year would be a real push with more dealers coming on board and everything happening at once.

Other manufacturers were dialing up their advertising and incentives to counter our entry into the market, and I was very much aware Infiniti would start selling cars on November 8.

While all this was going on, there was a minor situation at home. We moved again. Having five children in a three-bedroom home was not working. Cynthia and I sold our home in College Park and bought a five-bedroom home in the Turtle Rock area of Irvine. I don’t remember much about it, so I suspect Cynthia must have moved us, and I was AWOL.

“Things are going to happen so fast your head will swim, one thing fast on the heels of the other. You won’t be able to keep up. Everything will be happening at once—and everywhere you look, blessings!” Amos 9:13-14 (MSG)

Infiniti was not selling cars, but they were advertising heavily in advance of their launch. Infiniti hoped to convince prospective buyers to delay their Lexus purchase and wait for Infiniti to launch. This set up a creative TV advertising battle that would make one of us a winner and one of us a loser.

(To be continued in “Champagne Glasses, Ball Bearings, and Zen”)