“Sometimes I wonder how it happened,” Dick Landgraff, a Ford Taurus engineer, was quoted saying to Mary Walton in her book Car. “Did Toyoda—the guy who runs the company’s name is Toyoda—did he suddenly have an idea one day? Did it bubble up from the bottom? Bubble down from the top? Did it have—you know, the Japanese consensus? It’s overblown because it isn’t quite as consensus-oriented management as you might think—but did they consensus on this over 20 years? I don’t know how they did it.”

Toyota “did it” by using continuous improvement and just-in-time production improvements over a long period of time, or as one industry observer commented, “by rapid inch up.”

There is no better example of how Toyota did it than the company’s “just-in-time” production system championed by Taiichi Ohno. This production system happened inch by inch and took more than 20 years to develop, during which Toyota was continually working to reduce the “three Ds” at its plants: the dangerous, dirty, and demanding aspects of assembling a car. It was working. It took Toyota just 13 hours to build a car, the shortest in the industry.

All the Toyota plants in Japan were running on overtime. The average plant worker was putting in about one hour of overtime per shift. This contributed to the increasing financial strength of the company. With global sales of over $64 billion and profits over $3 billion, Toyota was rich. 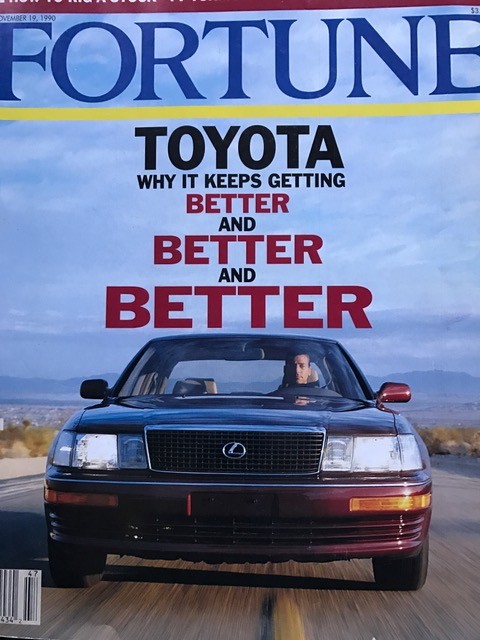 Dr. Toyoda refused to brag or boast about Toyota’s progress. Instead he said, “We are still slow in movement. We felt we suffered from large-corporation disease. It had become extremely difficult for top executives to convey their feelings to the workers. So, we embarked on a cure. We have a saying: ‘A large man has difficulty exercising his wits fully.’ We wanted to rectify this by being sure that customer satisfaction is our first-priority.”

As 1990 was coming to an end, the USA Today headlines read “Return of the Big Car” heralding the growing luxury market. But then they asked the question, “Will a Gulf War get in the way?”