Lexus had not only survived, but thrived through the trials and tribulations of launching a new franchise, a safety recall, and an economic recession. How long could our winning streak continue? The new SC400 Coupe and the new ES300 would be great additions to the line-up, but we needed to warn the dealers and the associates against becoming complacent.

Our goal of unquestioned leadership in quality and customer service required persistence. To reinforce these values, we told this story about a young boy:

There was a nine-year-old boy. His father was a poor farmer, a wanderer, and a ne’er-do-well. The boy’s mother, his only source of inspiration and love, was dying. She struggled to whisper her last dying words to the boy and his sister. She seemed to say, “Be good to each other, live as I have taught you, worship God.” She died seven days later.

The boy and his sister lived in poverty and intolerable squalor. The boy liked school and did well, but his father ridiculed his attempts at learning. As he grew into manhood, the young lad decided he wanted to be a lawyer. But again, his dull and ignorant father told his son he would never amount to anything and that he, like himself, would also be nothing but a poor farmer.

But the boy refused to listen. With great sacrifice, he studied law and was admitted to the bar.

He ran for the state legislature and lost. He ran a second time and won.

Still he persisted and was elected President of the United States. There was an assassination attempt on his life before he even took office.

The members of his cabinet viewed him with outright contempt. His Secretary of Defense openly denounced him as a painful imbecile and a long-armed ape. His Secretary of State in a formal letter to him, suggested he abdicate the office of the presidency because of his incompetence.

The day came when he was to share the speaker’s platform with the greatest orator in America.  He painstakingly wrote his own speech. He was determined to represent himself well. But the speech was not well received. The Chicago Times wrote about the speech, “The cheek of every American must tingle with shame as he recalls the pitiful utterances of the man who has to be pointed to as President of the United States.”

The emotional drain of his presidency and the personal suffering he endured had been so great that he lost more than 40 pounds. He had severe headaches, cold hands and feet, and heavy fatigue. He was known to disappear behind the closed door of his office for long periods of time. Those outside could hear someone inside crying.

Still he persisted—until an assassin’s bullet took his life.

What possible good could come from a life filled with so much heartache, misery, and failure?

If you drive across this country, today you will find cities, counties, streets, freeways, tunnels, bridges, banks, parks, museums, universities, high schools, grade schools, and children named after this man.

If you go to the Library of Congress, you will find more than 3,500 books written about this one man.

And that speech that was so poorly received by so many, today is memorized by school children and acclaimed by historians to be one of finest speeches ever given by a leader to his people.

As this man lay on his deathbed, the Secretary of Defense, who had four years earlier so bitterly condemned him as a painful imbecile, wept at the side of his bed and gave him to the ages.

The funeral train that took this man’s body back to his hometown traveled through 180 cities and seven states. So great were the crowds to pay their respect for him that police had trouble maintaining order. An estimated one-third of the population of the country, 31 million people,  came out to silently watch his funeral train pass by, some walking as far as 100 miles.

We should all be thankful that Thomas Lincoln was wrong about his son, Abraham, and that Abraham Lincoln persisted until he achieved his goal to save the Union.

A young lawyer wrote to Lincoln asking him what the most important thing to being successful was. Abraham Lincoln wrote back, “Your own resolution (persistence) to succeed is more important than any other one thing.” 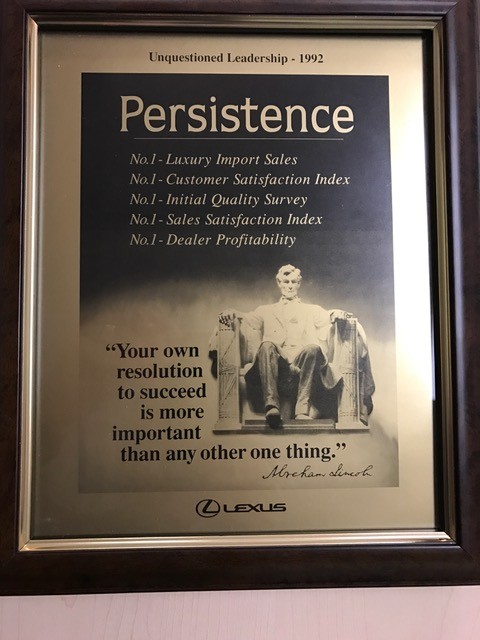 After the Lexus dealer meeting, everyone in attendance was given a picture of Abraham Lincoln and his quote on persistence along with the goals for Lexus.

“If you keep knocking long enough he will get up and give you whatever you need because of your shameless persistence.” Luke 11:8 (NLT)

There would be no rest. The Automotive News headlines read, “The Big 3 to U.S.: We’re hurting, Japan isn’t.”
(To be continued in “Dumping Charges Sought Against Toyota/Lexus”)